Dragon Trail Research's survey of Chinese travelers provides insight for the travel industry on prospects for the recovery of Chinese tourism, and how the COVID-19 crisis may impact Chinese consumers’ future travel plans and priorities.

In early March 2020, Dragon Trail Research conducted a survey of Chinese travelers to gather insight for the travel industry on prospects for the recovery of Chinese tourism, and how the COVID-19 crisis may impact Chinese consumers’ intention to travel and travel priorities.

– 88% of respondents have canceled or delayed travel plans due to the coronavirus crisis. Half said they would travel when the crisis is over, with 19% reporting that they either would not travel or were afraid to travel.

– Travelers born in the 1990s were the most optimistic about when recovery will happen, and likely to travel sooner than older respondents. They are also the most likely age group to have increased travel budgets after the crisis. This will be an important target audience for travel marketers once recovery begins.

– Instead of an explosive rebound during any one holiday period, the survey data leads us to believe that we are likely to see several smaller waves of growth for Chinese travel, starting in May at the earliest, followed by summer holiday months and October.

– The crisis has changed travel priorities, and there is now increased appeal for less populated areas, with high interest in nature tourism, small towns, and self-driving. Post-80s and post-70s generations show increased interest in wellness tourism now than before the crisis.

– The crisis has made many respondents closer with their families, and they plan to prioritize spending leisure and travel time with family in the future. We would expect family travel to become an even more important form of travel than before the crisis.

– Among the most significant reasons preventing Chinese from traveling in the future are fears about health and safety, as well as lack of money and time due to the crisis. While there is very little that travel brands can do about the latter, apart from major discounts, post-crisis marketing will need to put forth a strong message about health and sanitation to convince travelers it is safe to visit.

The coronavirus crisis and its subsequent travel bans began in China just at the start of the Chinese New Year period at the end of January, one of the most important times of year for both domestic and outbound travel. Consequently, many survey respondents originally planned to travel during that time. Around half of the respondents were originally planning domestic tourism, and over one-third either planned to visit family or not travel during the period. Respondents in first-tier and new first-tier cities were more likely to have plans for outbound travel compared to respondents from second-tier cities. 35% of respondents in first-tier and new first-tier cities either did not have travel plans or visited family during the outbreak, compared to 42% of respondents from second-tier and below cities. Domestic tour groups and flight+hotel packages were suspended from January 24, and outbound tours and travel packages were suspended from January 27. In total, 77% of respondents canceled their travel plans, and 88% either delayed or canceled. Notably, 30% of respondents actually canceled and 4% delayed their travel plans before the bans on group and package tourism went into effect. In the time period leading up to the travel bans, the coronavirus outbreak in Hubei Province was already in the news, and travel out of the province restricted, which prompted a number of survey respondents to change their plans at an earlier date. 16% only delayed rather than canceled, or still have travel plans and are waiting for the recovery period.

For domestic trips, Yunnan Province was the leading destination choice, with Lijiang, Dali, and Kunming as the top cities to visit. The southern island province of Hainan was also a popular choice, as were the first-tier cities: Beijing, Shanghai, Guangzhou, and Shenzhen. 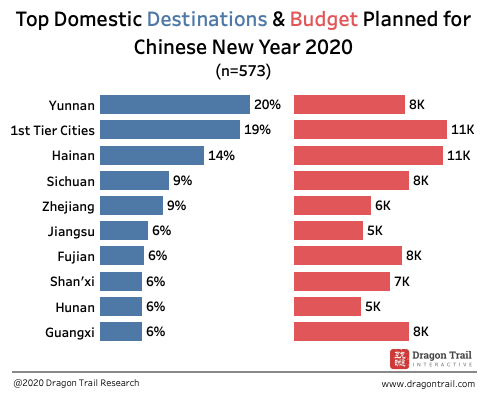 For outbound trips planned for the Chinese New Year period, the top destinations were APAC countries or territories. When it comes to budget, trips to the US had surprisingly high budgets compared to other destinations. Note that the sample size for outbound trips in this polling is only 102. Therefore, results are for reference only. 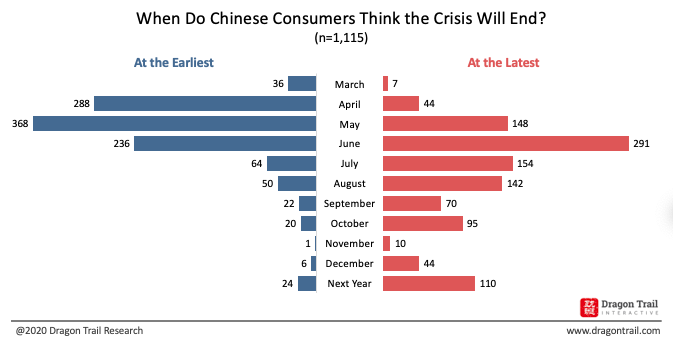 **p-value, if < 0.05: results are statistically significant Instead of an explosive growth of travelers during holidays such as the Labor Day holiday in May, the survey data leads us to believe that we are likely to see several smaller waves of travel. At the earliest, the first wave of travelers will start in May, with 14% of respondents planning travel for May and June. This will be followed by a stronger wave during the summer months, with 26% planning to travel again in July and August. Another 15% plan to wait until the October National Day holiday. As of the start of March, approximately one-third of respondents had either delayed their travel plans until 2021 or were not planning any travel.

At the latest, we might not see a rebound of the Chinese travel market until August or October, with 21% of travel plans planned for these two months, and 35% of travel plans delayed until next year in a more pessimistic scenario.

The coronavirus crisis has been a transformative experience for many Chinese in the way they think about and plan travel. When asked about types of trips they intended to take post-crisis, they demonstrated a high interest in trips that are removed from populated urban areas, such as nature sightseeing and self-driving trips. Relaxation is the top reason to go on a trip post-crisis, followed by experiencing local culture. 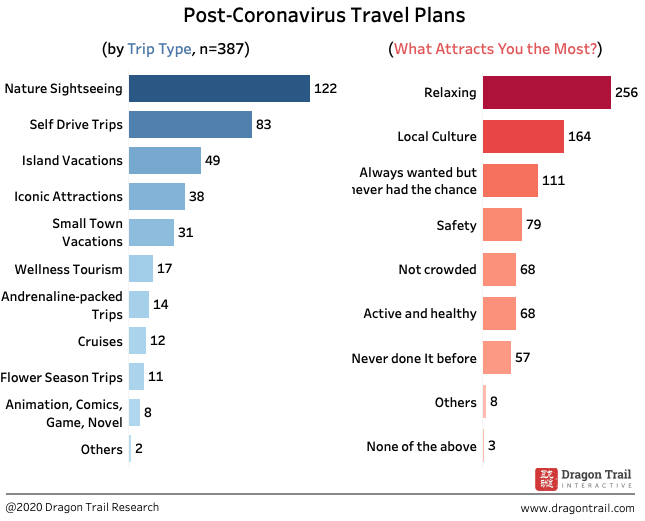 Despite the isolation and restrictions placed upon daily lives during the coronavirus crisis, people are grateful to have spent some time with families. 35% of respondents said that spending time with family was one of the positive impacts of being isolated at home. A quarter said they had improved their cooking skills during this period. 15% are now more interested in wellness tourism.

Looking at positive impact by age, post-90s are more likely to say they now have more budget for their next trip compared to post-70s and post-80s. Post-70s and post-80s are also more interested in wellness tourism now than post-90s.

When it comes to negative impacts of the crisis, we asked people to rank their seven biggest concerns potentially affecting future travel plans from most severe to least severe. The top concern related to safety, followed by job-related issues such as used-up annual leave and loss of income.

For the respondents who would like to travel, a few recurring topics come to attention. 30% said they will seize any opportunity to travel once it’s safe. 14% said they will select less populated areas, and 9% said they will pick locations very carefully. We noticed multiple responses to our open-ended question related to seizing any opportunity to travel, such as “travel as soon as possible”, “traveling when there is a chance”, “doing what I want to do without hesitation from before the crisis”, and “traveling on a whim”. 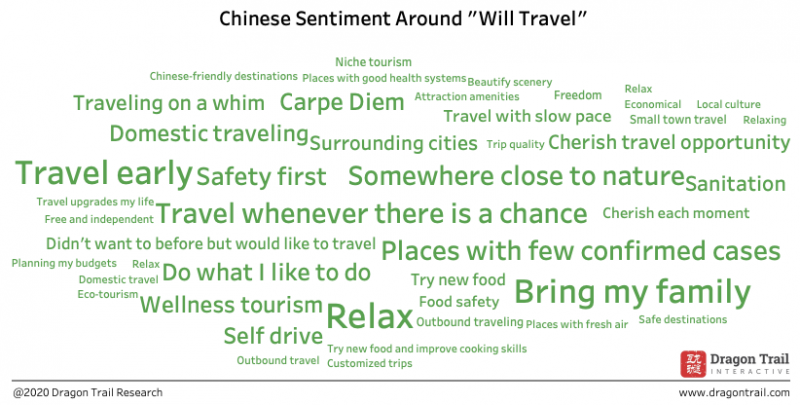 When it comes to lessons learned from the crisis, many respondents are more tuned in to safety while traveling now, as well as spending time with family and having a healthy lifestyle. Coming out of the crisis, people have learned to place more importance on happiness than making money, focusing on the important people and spending time with them. 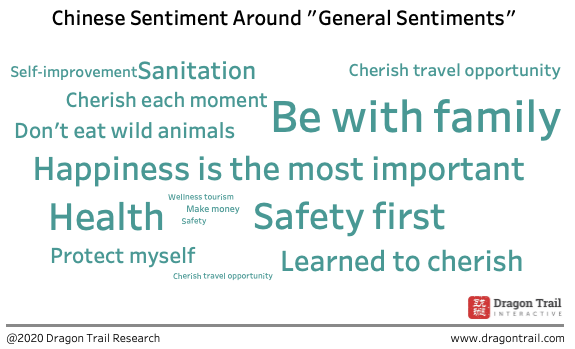 As for reasons for not traveling after the crisis, we noticed the biggest reasons people cited were budget and safety-related, which reflect a high level of uncertainty at the time the polling took place. Some are worried about being infected while traveling. We also noticed a few concerns surrounding safety measures, number of confirmed cases at destinations and food safety.

The polling took place between March 2-March 6, through Tencent’s survey panel. We collected 1,115 completed responses. To optimize representation, the survey controlled for the sample’s gender and city of residence to match population levels. Among the 1,115 responses, 50% were collected from cities classified as second-tier and below. The polling covered four first-tier cities, 14 “new first-tier” cities and 26 second-tier cities.

Our survey sample has a stronger representation from the post-80s and post-90s generations, which are also the largest demographics for outbound travel, and the highest spenders on outbound travel. We included survey respondents aged 19 in the post-90s category. Given the smaller representation of post-00s in the sample size, this inclusion is not likely to significantly impact post-90s’ results. Additionally, there is a stronger representation of four-person households among younger post-90s aged 19-24 compared to those aged 25-29. 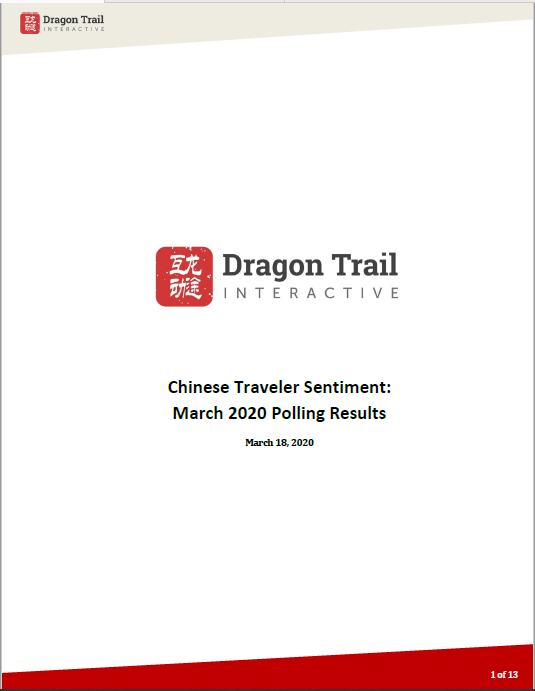 For a free PDF copy of this report from Dragon Trail Research, please email us at communications@dragontrail.com.